It was May 1999 Brian did his first tattoo and knew then that this is what he would be doing for the rest of his life. After completing his apprenticeship at the Shaman’s Den in Binghamton NY he did some tattoo conventions and then traveled to Florida for an 8 month stay only to return to NY to start his own tattoo studio in 2005.

While Brian was happy with being a business owner he still had a passion for traveling and then in the summer of 2011 he rode a bicycle across the country, from New York to California meeting a lot of new people and finding cool new places like Fort Collins CO which he later relocated to, selling his studio and making the move west in 2012.,

Some of Brian‘s favorite styles to do are realism, portraits, black and gray, wildlife, and anything creative. He really enjoys doing walk-ins and meeting new people taking on any challenge that is presented. Please call the shop, or stop by to talk about getting set up with your own appointment. Brian can also be reached at skindoodler@hotmail.com

Make sure to check out Brian’s personal website for more info, SkinDoodle.com

Not available for color or wording tattoos.

Brian Barrett was born in 1977, he was raised on a horse farm in a small town in New York, Newark Valley, a 1 traffic light kind of town (no where near the city). As he was growing up he would draw, or doodle, with his mother. Drawing the human figure and animals from a young age.

His love of art transformed when he was 8 years old, he won his first award drawing Christmas through the eyes of a second grader. From that point he knew he wanted to be a professional artist, not yet knowing what field of artistry he would land in. Through high school Brian won other awards and would join as many art programs as possible.

In the mid 90’s, as Brian started real life he had no knowledge of the tattoo industry and he worked odd jobs to support his new and growing family. Working as a dietary aide, a gas station attendant, a janitor, and a mechanic. He never really found his niche, until he was at a party where tattoos were being done, he saw that there were a lot of people getting tattooed. After realizing the potential he sold his car and started his journey as a professional tattoo artist. 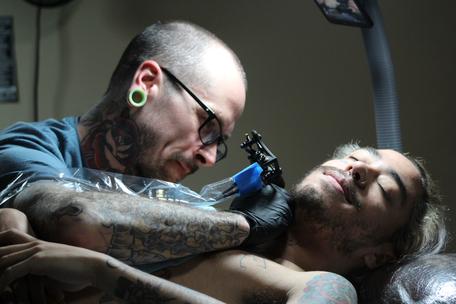